Shopping Cart
Your Cart is Empty
Quantity:
Subtotal
Taxes
Shipping
Total
There was an error with PayPalClick here to try again

Thank you for your business!You should be receiving an order confirmation from Paypal shortly.Exit Shopping Cart

Andrew C. von Eschenbach, M.D., US Commissioner of Food and Drugs, says that Avian Influenza, commonly known as bird flu, is one of the most significant public health issues the world faces.

The most virulent form of the avian influenza is known as the H5N1 virus. It is a type of influenza A virus commonly found in birds. In humans, H5N1 causes pneumonia and multi-organ failure and is far more severe than the ordinary flu. Almost 300 people worldwide have been infected with this virus since 2003 and more than half of them have died. To date, the H5N1 influenza has remained primarily an animal disease. However, should the virus acquire the ability for sustained transmission among humans, people will have little immunity. It would cause much sickness. In an H5N1 world-wide pandemic, it is estimated that between 10,000,000 and 150,000,000 people would die.

We put together for our key words, Bird Flu, Sickness, and the phrase the Anger and the Wrath. The probability that a monkey text in the ELS random placement text population would have as small area table as that produced by the Torah text is 8.5/1,000,000. 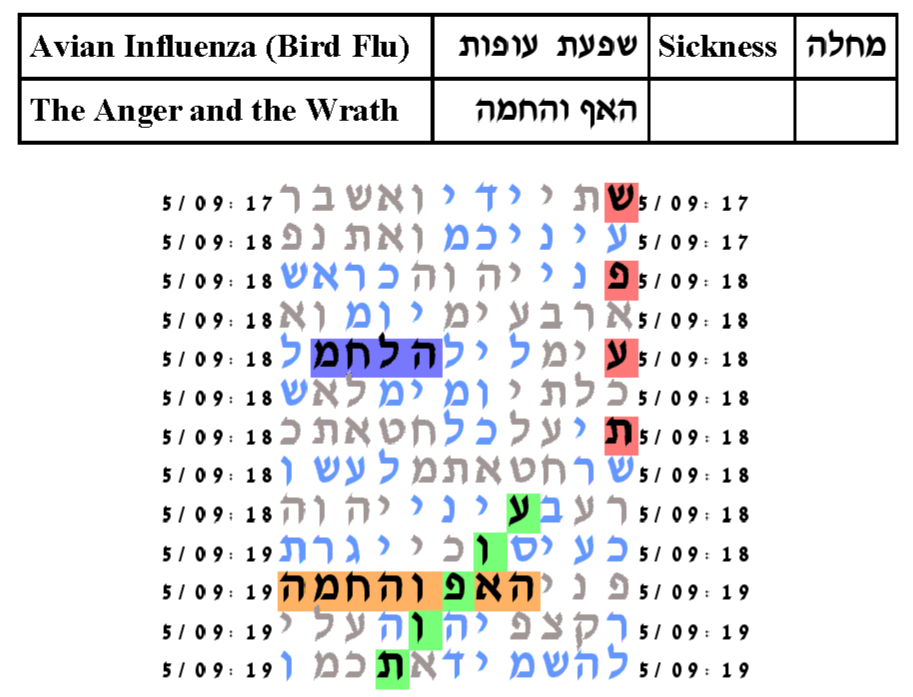 The expected number of ELSs is set to 30. The resulting table is on a cylinder size of 13 columns. The probability that a monkey text in the ELS random placement text population would have as small a table as this one is 8.5/1,000,000.